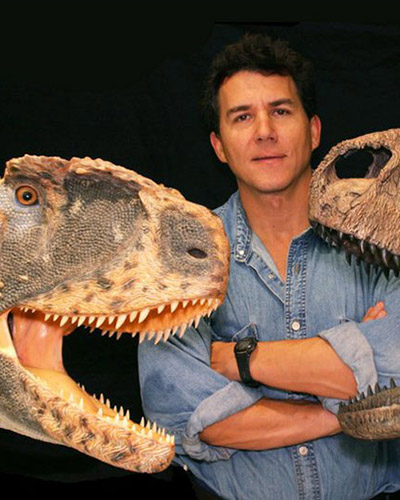 A professor at the University of Chicago and Explorer-in-Residence at the National Geographic Society, Paul Sereno, works with students, technicians and artists in his Fossil Lab to bring to life fossils unearthed from sites around the world.

He began his fieldwork in the foothills of the Andes in Argentina, where he discovered the first dinosaurs to roam the Earth some 230 million years ago. Other expeditions have explored Africa’s Sahara, Asia’s Gobi Desert, India’s Thar Desert, and remote valleys in Tibet. He also works every year closer to home excavating his own “Jurassic Park,” a dinosaur graveyard in Wyoming’s Bighorn Mountains. With a menagerie of spectacular dinosaurs to his credit, he also is known for discovering a series of extinct crocodilians, including the 40-foot long dinosaur-eater dubbed “SuperCroc.” Sereno’s latest discovery, a human burial site in the Sahara predating the Egyptian pyramids, provides a snapshot of life in a once “green” Sahara.

Featured in National Geographic magazine and many documentaries, Paul was named Teacher of the Year (1993) by the Chicago Tribune and was awarded the University Medal for Excellence from Columbia University (1999). He co-founded Project Exploration, a novel science organization that recruits future scientists among urban youth. That effort earned the Presidential Award for Excellence in Science, Mathematics and Engineering Mentoring from the White House (2009).